Sri Sacchidananda Shivaabhinava Nrisimha Bharati Mahaswamiji adorned Sringeri Sri Sharada Peetham as its 33rd Jagadguru Shankaracharya. Born as Sivaswamy on 11 March, 1858 at Mysore, He was just eight years of age when He caught the eye of Jagadguru Sri Nrisimha Bharati Mahaswamiji, the 32nd Acharya of the Sringeri Sri Sharada Peetham during the latter’s visit to Mysore. He was initiated into samnyasa by the Jagadguru on 02 August 1866 and blessed with the monastic name, Sri Sacchidananda Shivaabhinava Nrisimha Bharati. On the night of his initiation into samnyasa, in His sleep. the young ascetic was found intoning the sublime upanishadic Truth, “Sarvoham,” meaning, “I am all.” He went on become a sage perfected in yoga and established in the Supreme. His absorption in nirvikalpa-samadhi, the pinnacle of yoga, was so intense that His guru had to direct Him to refrain from frequently abiding in that state for prolonged durations lest His absorption become irreversible, leading to his corporeal death. In fact, He was also directed to engage in scriptural studies and in various activities conducive to the welfare of his devotees. He toured South India accompanying His guru for 18 years soon after His samnyasa and returned to Sringeri in 1878. He undertook three pontifical tours covering in all the Southern Indian states and Maharashtra. In the process, He blessed the people with His immaculate benedictory addresses, consecrated hundreds of temples, engendered faith in Sanatana Dharma among the masses, founded institutions for the study of vedas and sastras and established many branches of the Sringeri Math. In particular, He instituted the Sadvidya Sanjivini Mahapathashala at Sringeri for the study of Sanskrit and the Vedas, and the Bharatiya Giravana Proudha Vidyabhivardhini Patashala at Bangalore for advanced scriptural studies. The most accomplished scholars of his day were awed by His erudition. The famed Mahaganapati Vakyartha Vidwat Sabha was launched by Him. Presided over by the Jagadgurus of the Peetha, this ten-day annual event is an assemblage of very eminent scholars from all over India; it witnesses discussions and debates in chaste Sanskrit on intricate topics in various sastras. To Him goes the credit of determining the birthplace, Kalady, Kerala, of Bhagavatpada, consecrating a temple for Bhagavatpada there and instituting the celebration of Shankara-jayanti every year in a grand manner for five days at Kalady and elsewhere. Under His directives, the complete works of Sri Shankara Bhagavatpada were published in the Shankara Granthavali series. It was at His behest that on the Northern banks of Tunga in Sringeri, the present hermitage, Narasimha-vana, of the Jagadgurus was set up and an abode, Sacchidananda-vilasa, was built there. He took to poetry as fish to water. His compositions and extempore metrical outpourings in homage to various divinities and on vedanta, besides a few essays of His have been compiled and published under the title Bhakti Sudha Tarangini. They have only themselves as parallels. In a brief biographical note to this book, his disciple T. K. Balasubrahmanyam writes about Him, “His winning personality, His smiling countenance, His many-sided learning, His broad sympathy, His child-like simplicity…His intense solicitude for the welfare of all…His rigorous penance, His innate purity…His universal kindness…attracted towards Him every living soul that came into contact with Him”. No wonder He is renowned as an incarnation of Bhagavatpada Himself! Having felt that the purpose of His sojourn here was accomplished and having nominated His beloved disciple Sri Narasimha Shastry to succeed Him in the peetha, Jagadguru Sri Sacchidananda Shivabhinava Nrisimha Bharati Mahaswamiji shed His mortal coil on 20 March, 1912 at Sringeri. 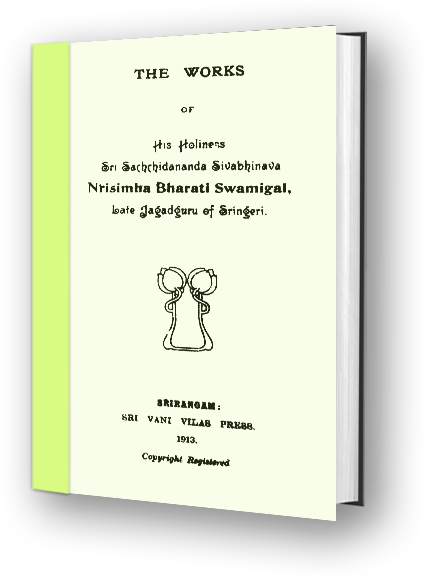 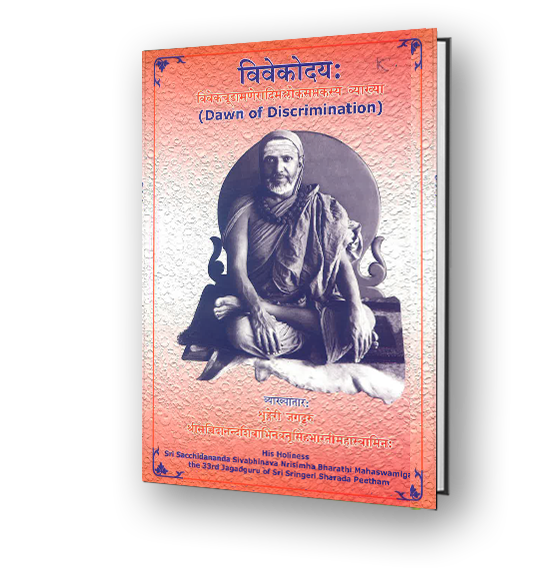 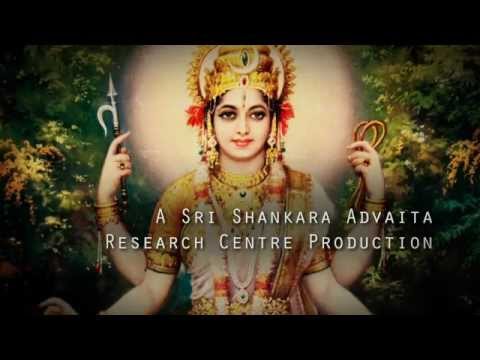 The 33rd Jagadguru of Sringeri 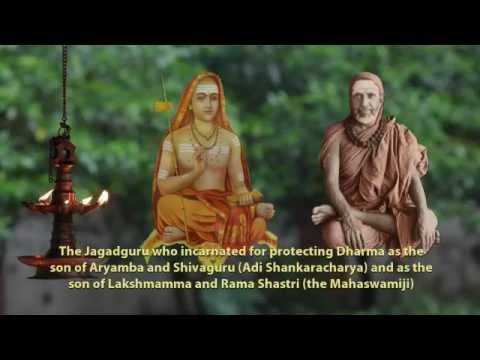 The Reincarnation of Sri Shankaracharya